Step Up for Life

"Step Up for Life" is the first public health campaign organized by HEVI in the Republic of Croatia. The goal of the campaign is to raise awareness of peripheral arterial disease (PAD) and critical limb ischemia (CLI) leading to leg amputation.
This campaign enables us to act preventively and avoid unfavorable outcomes by informing and educating the public about the possible consequences of untreated PAD and CLI. The campaign includes a number of marketing activities, the most important being our open-air events, where we educate the public through a direct dialogue and measure ankle-brachial indexes (ABI) to demonstrate its significance and value as a routine medical practice.

Early diagnosis of occluded arteries can save the patient from adverse outcomes! 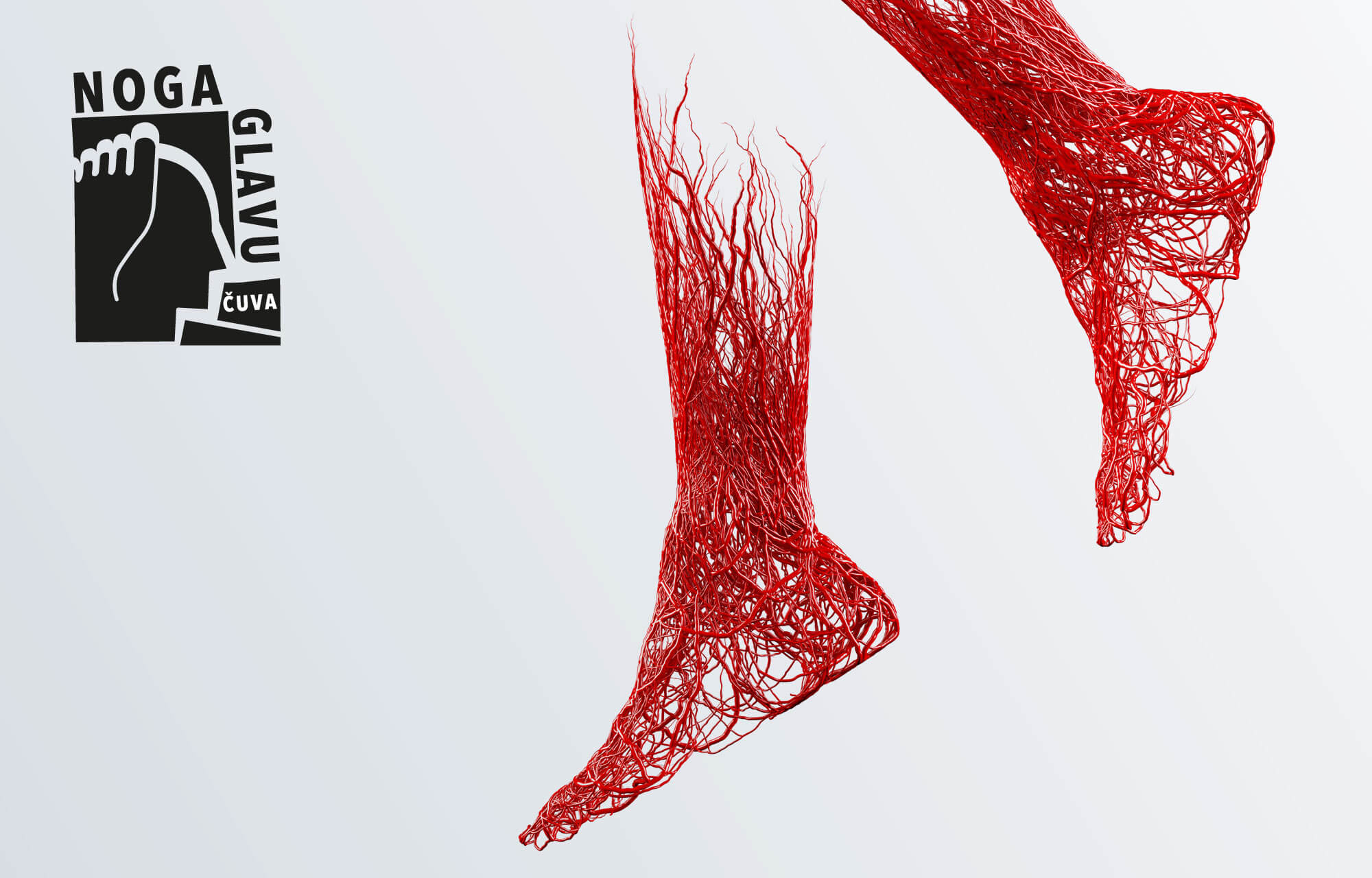 It is estimated that 202 million people worldwide suffer from PAD.

Peripheral Arterial Disease (PAD) occurs when the leg arteries become occluded (blocked) with fatty plaque (atherosclerosis). The disease does not manifest any visible signs and symptoms for a long time. Untreated PAD leads to advanced forms of the disease where amputation is the only possible course of treatment. PAD it is often associated with cardiovascular diseases, carotid disease and cerebrovascular disease, as well as heart attack and stroke.

Around 70% of PAD cases can be connected to risk factors such as advanced age, smoking, high blood pressure, high cholesterol or hereditary factors.
One must keep in mind that SMOKING is the leading risk factor, because it leads to forming the arterial plaques by inducing atherosclerosis, which is the leading cause of heart attack, stroke and critical limb ischemia with risk of amputation.
DIABETES is very important additional risk factor for peripheral artery occlusion. Patients with concurrent PAD and diabetes are at higher health risk compared to healthy persons. The risk of amputation is 10 times higher in patients with concurrent diabetes and PAD.
By caring about your health and practising healthy lifestyle serious consequences can be avoided. 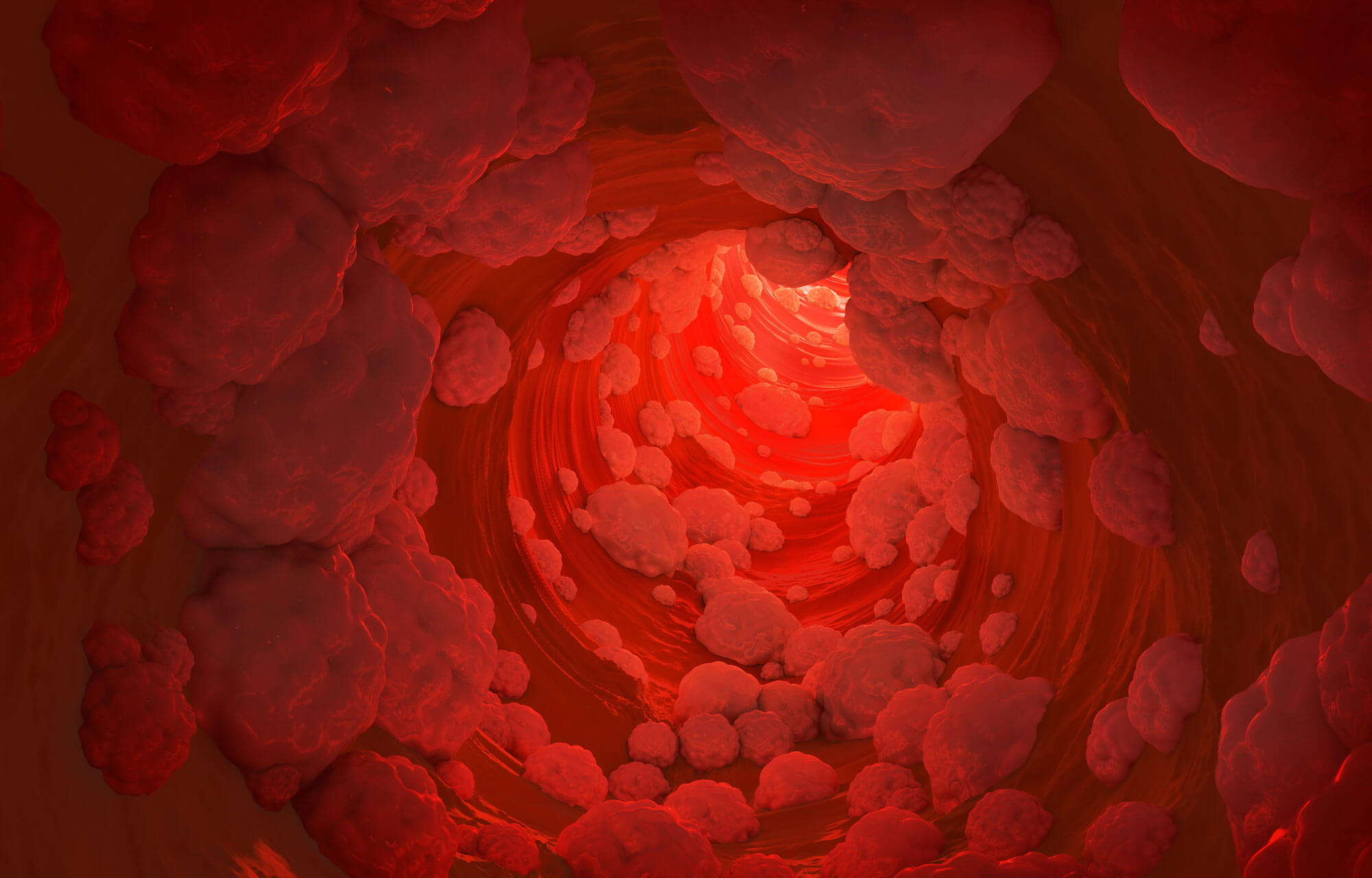 PAD develops slowly and without symptoms and is reffered to as "a silent killer".

which has yet not been clarified scientifically. This is why it is important to observe women with multiple PAD risk factors more carefully. It is a known fact that the risk of atherosclerosis rises faster in menopausal and postmenopausal women due to the lack of the protective effects of hormones. 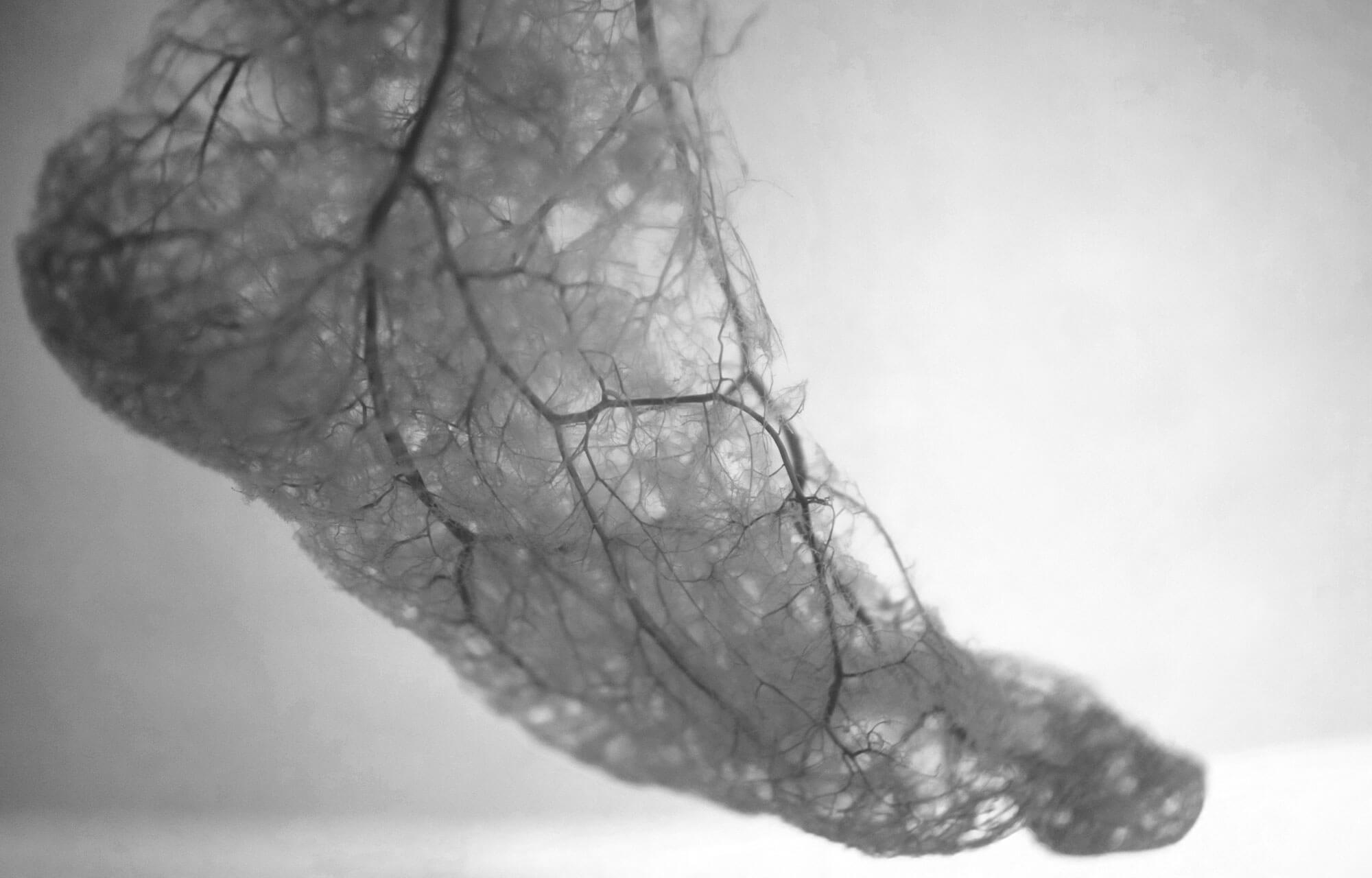 Critical limb ischemia is a condition that requires immediate medical intervention.
CLI can be identified quickly and easily by measuring AB indexes (ratio of blood pressure at the ankle to the pressure in the upper arm): 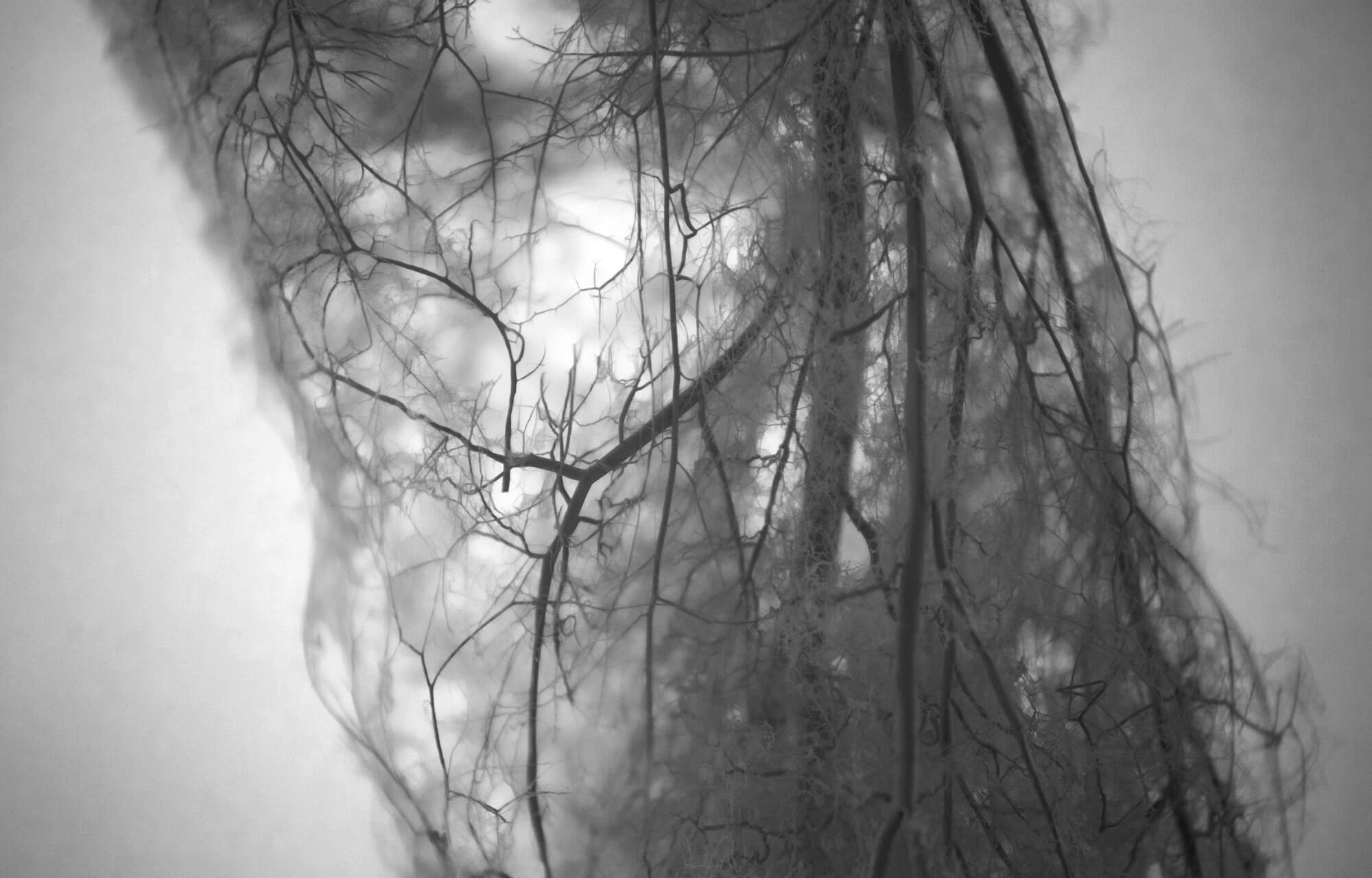 Leg amputation is the last option to save the patient's life.

Amputation is the surgical removal of a leg or a part thereof - most commonly a leg. It usually occurs due to PAD and diabetes. Patients often present with concurrent cardiovascular and cerebrovascular disease.
Amputation can be neccessary for a finger, part of the foot, the whole foot, lower leg, upper leg or the whole leg. In patients with concurrent PAD and diabetes the risk of amputation is 10 times higher.

In Croatia almost 4000 amputations occur yearly, out of which 1500 are major amputations, and 2500 are minor amputations (a finger, foot or part thereof).
Leg amputation is a traumatic event for a person. Rehabilitation is difficult and costly. We must insist on prevention and implementation of contemporary diagnostic and treatment methods. It is crucial to recognize early signs and symptoms of PAD and CLI, in order to increase the possibility of saving the leg, avoiding amputation and saving the patient's life. 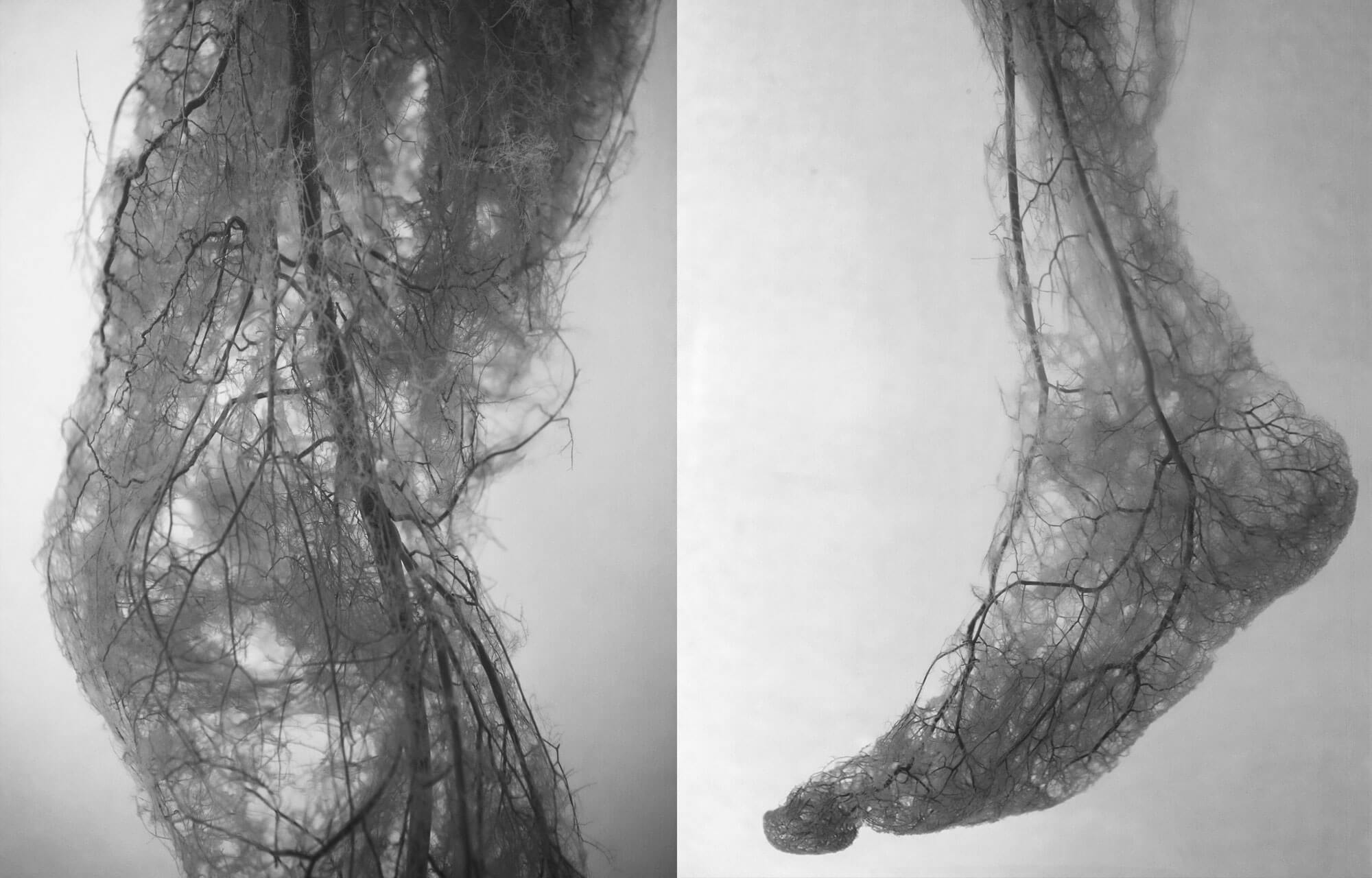 Technology dedicated to improving the wellbeing of the patient and saving resources is of crucial importance.

PAD patients must undergo "aggressive" treatment with all available medications and undertake neccessary lifestyle changes to address those that directly affect the disease, in order to prevent disease progression to the last stage - critical limb ischemia (CLI) and amputation. Leg amputation due to CLI is connected with the worst treatment outcome - the death of the patient. All PAD patients that have progressed to CLI must have some form of revascularization carried out in order to avoid amputation.

Revascularization can be performed by endovascular intervention or by way of surgical bypass. In some patients, PAD is too advanced, and there is no possibility of revascularization, thus making amputation unavoidable.
Currently, various minimally invasive (endovascular) PAD and CLI treatment options are available. Endovascular, minimally invasive methods include balloon inflation for dilatation of the clogged arteries (angioplasty, PTA), implantation of metallic stents or removal of fatty atherosclerotic plaque from the arteries (mechanic atherectomy). Revascularization procedure can be performed surgically, redirecting the blood stream around the clogged artery (bypass) to deliver blood flow to the problematic part of the leg.

Walking excercise - it is utterly important that the patients with PAD walk every day a few kilometers. Especially beneficial is nordic walking. 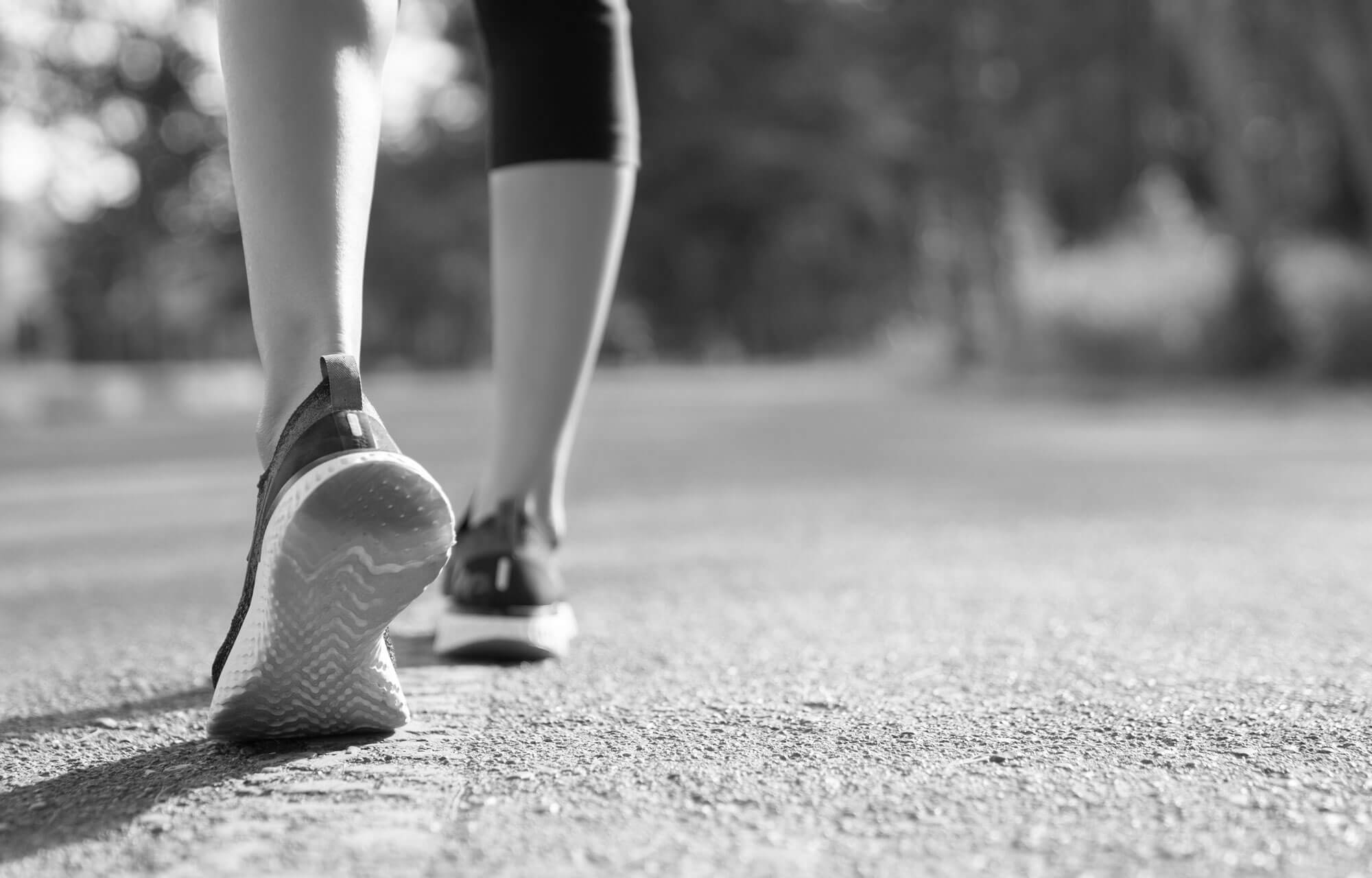 Due to the alarming number of almost 4000 amputations being performed annualy in Croatia, the Zagreb City Office for Health and the Croatian Endovascular Initiative (HEVI) are hosting „Step Up for Life“ public health event on May 11, begining at 11:55 at Cvjetni trg. During the event, free ABI index (ankle-brachial blood pressure ratio) measurement will be available for the public. Determining the ABI index is the quickest and simplest tool for early detection of PAD), which, if untreated, increases the risk of amputation.
Promotional and educational material will also be distributed during the event. The goal is to highlight the importance of AB index measurement as a routine general medical practice and thus reduce the amputation rate in Croatia and improve the citizens' general health.
Host: Karmela Vukov Colić
Organizers: City Office for Health and HEVI
Main sponsor: City of Zagreb
Sponsor: Teaching Institute for Public Health „dr. Andrija Štampar”.
Due to the importance of raising awareness regarding the dangers of untreated PAD the „Step Up for Life“ event is supported by many partners: The Ministry of Defence, the Healthy Arteries Campaign, Media instruments, MESI, Croatian Society of Radiology, Croatian Society for Vascular Surgery and the Croatian Cardiac Society.

The Partnership for Better Public Health: Thank you!

We wish to express our deep gratitude to all sponsors, partners and colleagues who have recognized the great social importance of this project and the fact that the only way to make a positive impact on the health of our citizens is by working together:

People take their ability to walk for granted until the moment when pain, in any part of a leg, starts to interfere with their everyday activities. PAD can endanger the quality of life, as well as life itself.
It is therefore essential to avoid and reduce all risk factors that lead to development of PAD (smoking, high blood pressure, obesity, physical inactivity, high blood fat, high blood glucose).

Who we are and what is our goal?

We are Croatian Endovascular initiative (HEVI – Hrvatska endovaskularna inicijativa) – unprofitable association which gathers together physicians of different clinical profiles: interventional radiologists, interventional cardiologists, vascular surgeons and cardiac surgeons – with the aim of developing the awareness and close cooperation among all physicians dealing with patients in need of endovascular treatment.
Our goal is to inform the general public in the Republic of Croatia about the importance of early diagnosis of peripheral arterial disease, critical limb ischemia and the dangers of consequential leg amputation.
The „Step Up for Life“ campaign was started to raise awareness of the public and within the medical professionals regarding the potentialy devastating consequences of the disease, also known as „the silent killer”, in general public and within the profession.
If people are properly informed and educated, they will be able to seek medical assistance on time, and avoid the traumatic experience of amputation. Amputation increases the risk of fatality by 48-71%.
Our activities promote the introduction of routine angiologic examinations and ABI measurements in patients under risk, especially in general practitioners' offices, similarly to blood pressure measurements.
Apart from prevention, increasing the number of patients being treated with endovascular interventions is another way of decreasing the number of amputations.

Croatian Endovascular Initiative (HEVI) is a meeting place for physicians of various specialities dedicated to raising awareness and supporting close cooperation among all physicians treating patients in need of endovascular treatment which improves health and saves resources.

Saving the leg can prolong your life!

On May 11th 2019 at Cvjetni trg in Zagreb a successful public health event called „Step Up for Life” was held, organized by HEVI, the City of Zagreb, Teaching Institute for Public Health „dr. Andrija Štampar” and other partners (The Ministry of Defence, the Healthy Arteries Campaign, Media instruments, MESI, Croatian Society of Radiology, Croatian Society for Vascular Surgery and the Croatian Cardiac Society). The main goal of the event was to communicate directly with the public and point out peripheral arterial disease (PAD) and critical limb ischemia (CLI) as the main cause of amputation. The most important thing we wanted to share with the public is that there is a simple, painless and affordable test for early diagnosis of PAB and CLI – the ankle-brachial index (ABI) measurement.
During the event, between 12AM and 3PM, members of HEVI and medical students from the Medical faculty of Zagreb provided the Zagreb public with the opportunity to have their ankle-brachial indexes (ABI) measured free of charge, and provided answers to all their questions along with guidelines for proper treatment. Over 100 people had their ABI measured on site and over 250 more interested citizens were advised to have their ABI measured at their health care provider. During ABI measurements, 10 people were presenting with PAD or CLI, and were advised to visit their doctor immediately. The public health event was covered by media, with publications by the Croatian National Television (HRT) and Nova TV aired in the primary informational program. Segments were also aired on Radio Sljeme and Laganini FM, and the event was covered by a number of internet portals.
HEVI board members also participated in live programs on HRT4 and Radio Sljeme before and following the event at Cvjetni trg. A facebook page was also created for the event.
Due to the worrying epidemiologic data on PAD, CLI and leg amputation, the „Step Up for Life“ campaign has been identified as a permanent concern which requires constant focus. 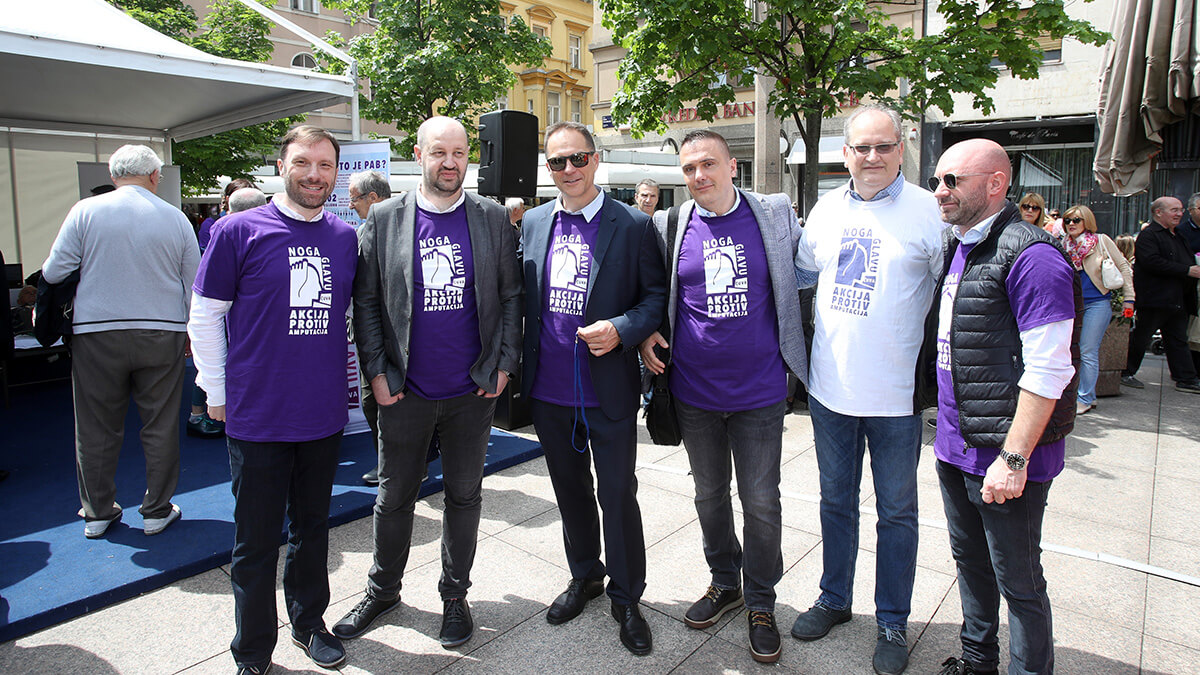 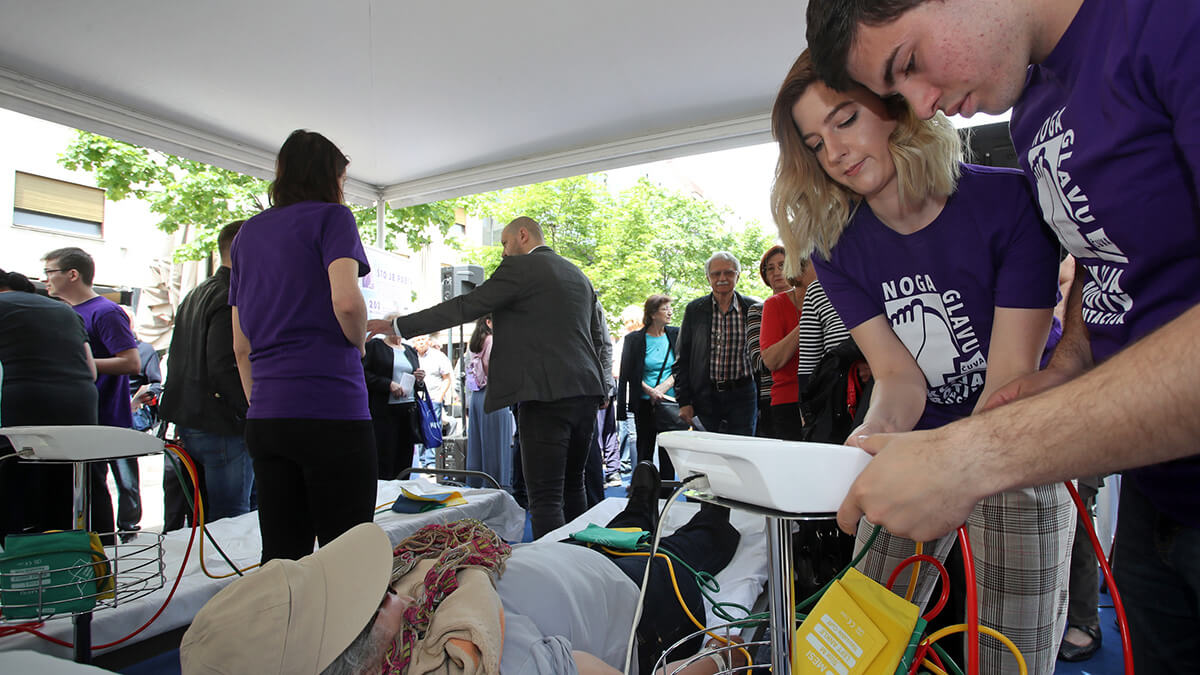 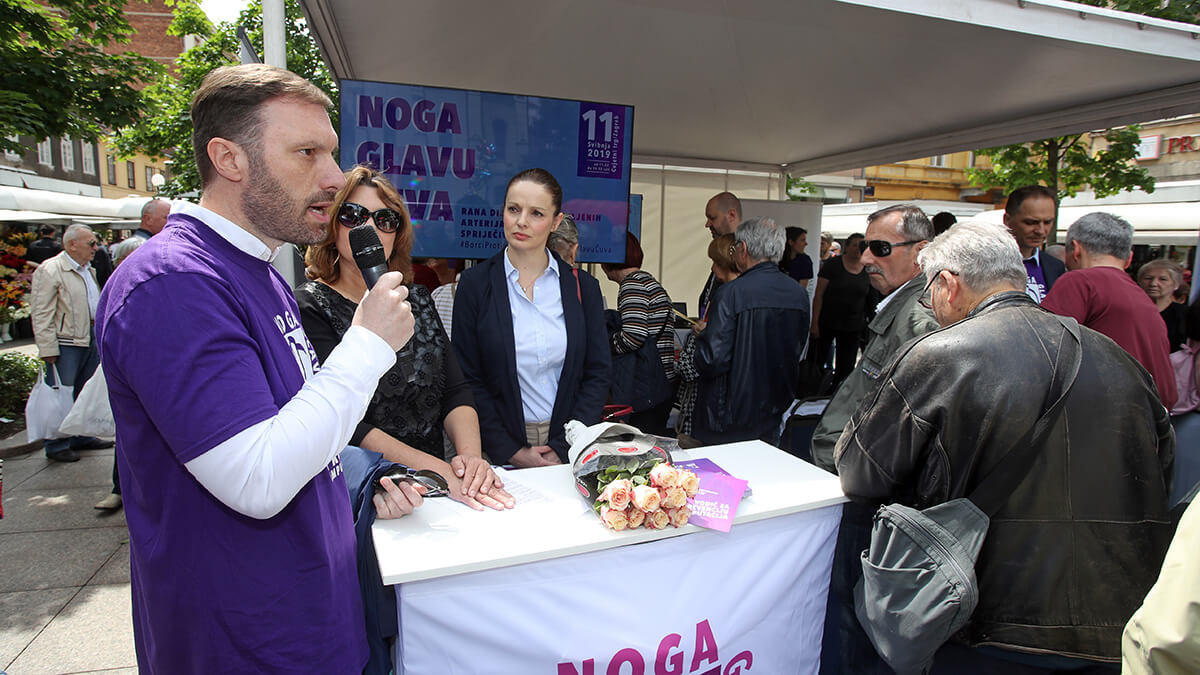 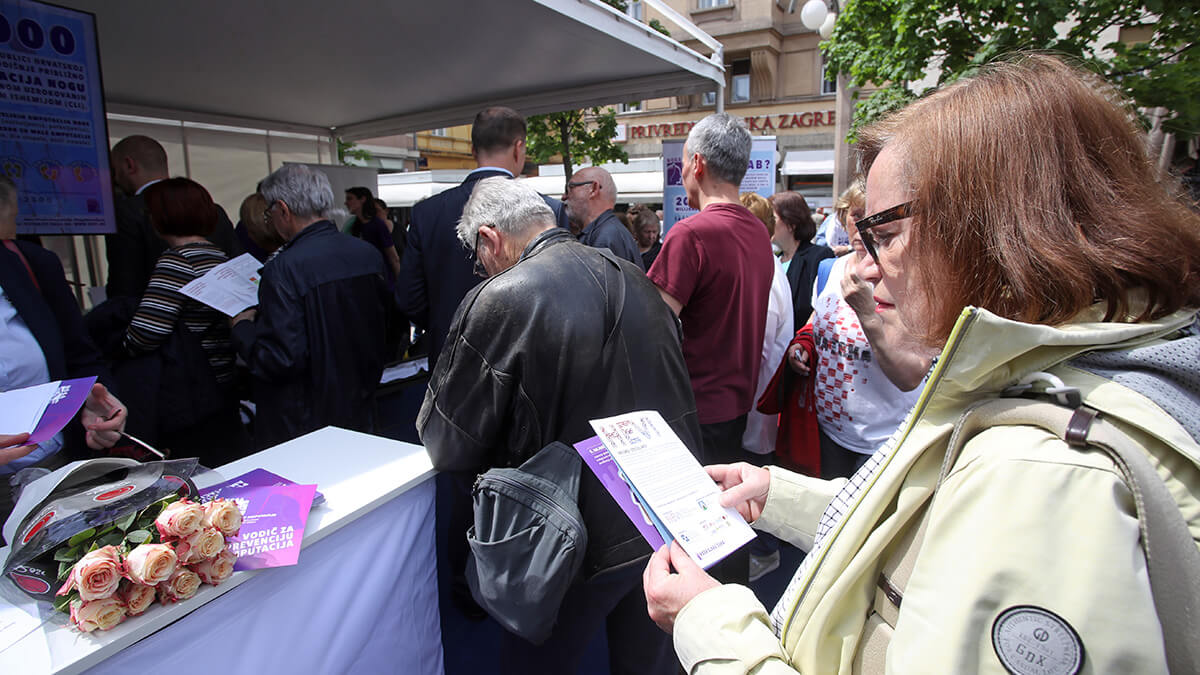 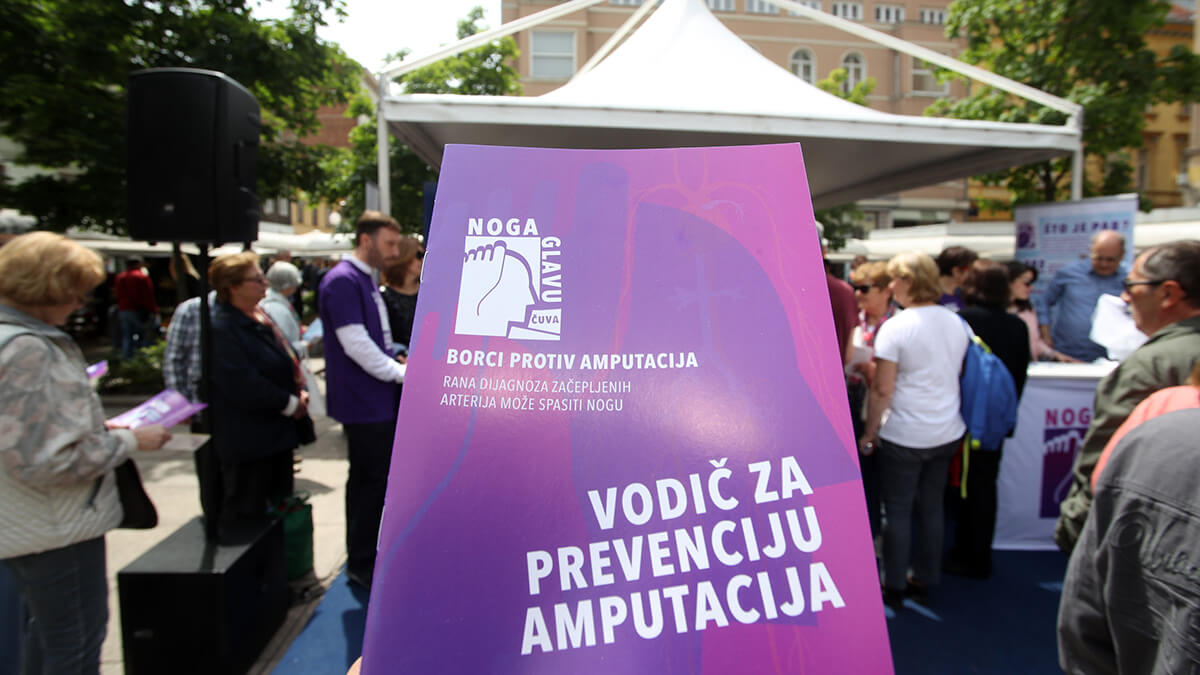 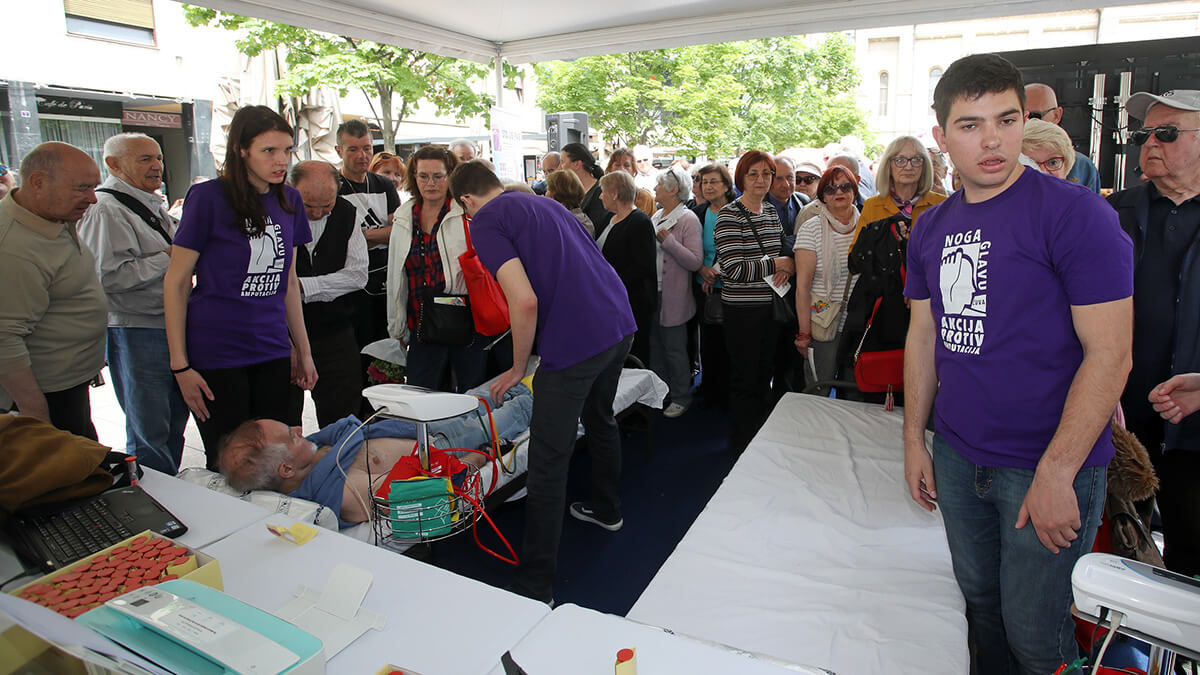 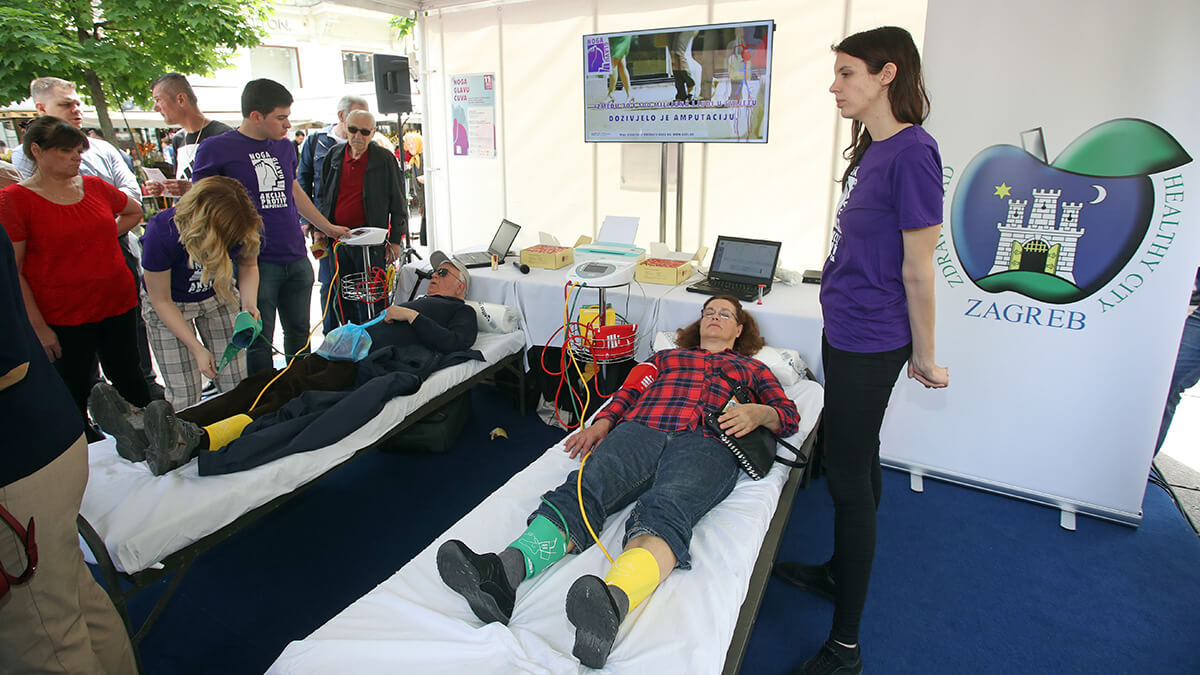 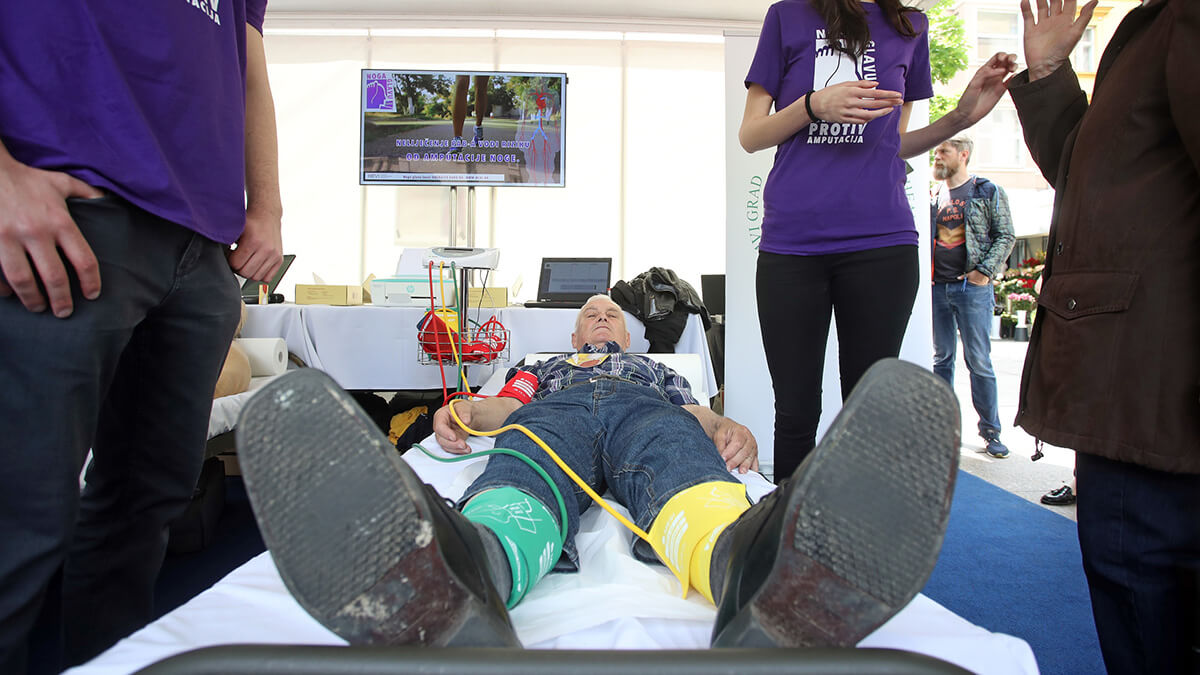